Power Your Home, Your Way

A Micro Wind Turbine is a wind turbine is used for micro generation, instead of enormous commercial wind turbines. We install the best Renewable energy for home, which is the small wind turbine. They come in two types

Horizontal turbines get the wind’s energy with their propeller-like blades, which act much like an airplane wing. When the wind blows, a pocket of low-pressure air form get in one side of the blade. The low-pressure air pocket then pulls the blade toward it, making the rotor turn. This is called lift. The power of the lift is a lot more grounded than the wind’s power against the front side of the blade, which is called drag. The mix of lift and drag makes the rotor turn like a propeller.

Whereas vertical wind turbine use drag based design to harvest wind energy. The turbine rotational energy is used to rotate the generator in turn generating electricity. 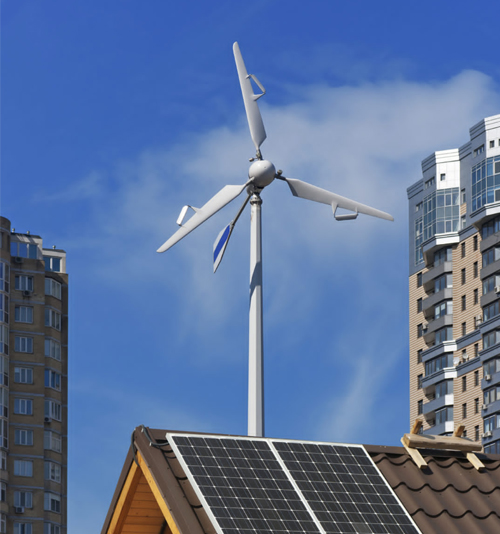 What Clients are Saying

“GREENYUGA has a professional touch through the solar panel installation at our place. In fact, we got the delivery on time with great professionalism and attention to detail. Their installation process is so simple and never interrupted us in our business. I recommend Greenyuga to everyone who is looking for sustainable energy and solar solution at home or office.”

“GREENYUGA offered us the top notch service with dedicated staffs that were very professional and knowledgeable. They helped me in knowing how cheaper it is to install solar panels at my home using their solar energy calculator. I would suggest people to move towards sustainable and greener tomorrow with solar solution as I could see it helped me to save my electricity bills to a greater extend for several years ahead.”

“Greenyuga gave me a quality and cost effective solar plant. The service they provide takes away the hassle/anxiety of the installation and help us focus on our business.”

“Initially, I wasn't sure whether to switch to solar energy. We have been facing power cut problems ever since I purchased this home. With GREENYUGA’S easy solar energy calculator option and with the well-skilled team of professional support, I now realized that solar panels for home lead to sustainable homes with cheapest energy bills ever.”

Want to improve your quality of life with sustainable energy?

Greenyuga is an innovative thought process of a team dedicated to move India towards a greener Future, with a tagline “For Greener Tomorrow”. We provide a complete customized energy saving solution such as solar photovoltaic (PV) rooftops, solar street lights, solar pumps and solar water heaters, etc.